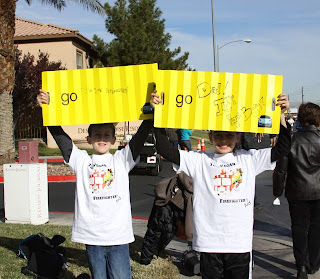 Here's a picture of 2 of my kids supporting me at mile 15 in Las Vegas.  It was great to see some familiar faces mid race!
Just wanted to let you guys know that I'm pretty much a celebrity now...  Okay maybe not, but I did have an interview with THE VEGAN POLICE.  The idea that someone is interested in my story is somewhat profound to me.  I am flattered to say the least!  So if you are interested...  http://theveganpolice.com/main/?p=1238  is the link to the interview.
Also, I am in the planning stages of my next run and I will update everyone once I have found a race that will work with all the schedules in our house.  I initially had intended on running one marathon and checking it off of my "bucket list"... but it was such as awesome experience that I think I may be in the early stages of an addiction.
We are always collecting donations for Farm Sanctuary, even between races so if you would like to donate you can send a check directly to me:

And once I get the next run set up we will open up the account for credit card donations again.

Thank you everyone for your ongoing support!
Speaking of support we ended up with $1040.00!  We received a check in the mail the day that we were preparing the donation for Farm Sanctuary.
Posted by The Vegan Firefighter at 2:33 PM

The Vegan Firefighter
Hello! Like the name of the blog I am The Vegan Firefighter. I am a firefighter and I have been vegan for two years now. I am also a runner, a dad and a husband. In my transition to becoming vegan I have been inspired by health for the most part but, I have also had some great experiences with animal sanctuaries and charities in California and animal welfare has also become a focus.

A couple of months ago (with my wife's oh so gentle urging) I decided to finally commit to my first marathon. As I began my training I started thinking (lots of time to think on those LOOONG training runs) how I could do more with this marathon goal. On one of these runs I happened to be daydreaming about a weekend my wife and I spent at the Farm Sanctuary in Orland, CA. We had, had a terrific weekend and were thoroughly impressed with the work the people there were doing to help animals and promote a cruelty free world; and then it came to me!... Could we possibly incorporate a fundraiser into this marathon? I jogged home to talk to the boss... and here we are! Basically, I will be training for the marathon and raising awareness for veganism and Farm Sanctuary by collecting donations. All those who donate $25.00 or more will receive a shirt telling everyone you have supported The Vegan Firefighter and Farm Sanctuary. And, all of the names of those who donated to this amazing organization will also get their name printed on the back of my shirt that I will be wearing in the LAS VEGAS MARATHON!

Give Forward ended on November 30, 2010. However, you can mail us a check if you would still like to donate!

Please email us at veganfirefighter@sbcglobal.net to let us know your donation is on the way and include your address if you donated $25 or more so we can send you your SUPER COOL shirt! 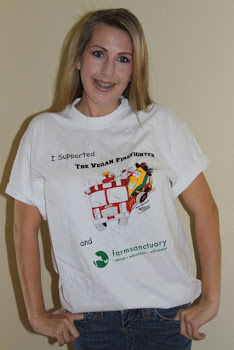